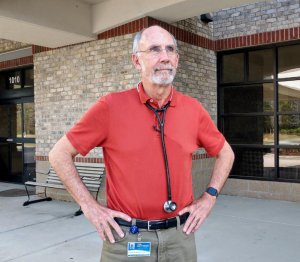 Over the next few days, Craven County will open three COVID-19 test centers – but don’t assume you can just pull up like you might at a McDonald’s drive-through and expect to be served.

Dr. Ken Wilkins, medical director of CCHC (Craven County Health Care) said that CCHC is working in conjunction with CarolinaEast Health Systems and the Craven County Health Department to each open a drive-through testing site. “I’m singing the praises of the medical community,” Wilkins said. “It’s been an impressive effort to find a way to respond to the coronavirus.”

Each organization will run its own drive-through.

People cannot simply appear, however. Rather, their visit has to be set up by their primary care physician.

Anyone who suspects they might have contracted the virus should call their family doctor. If they prove to be symptomatic, the visit will be set up.

He said two different groups will be tested: first, those who have either a fever or a cough, and who have either visited a Level 3 country, or who have had contact with a known COVID-19 patient.

A Level 3 country would be any country in Europe, including the United Kingdom and Iceland, as well as China, Iran, and South Korea.

The second group tested will be those with a fever and cough, whether or not they have visited a Level 3 country

In the second case, patients will be swab-tested for flu and wait for the result. If they prove negative for flu, a second swab is taken to test for COVID-19. Because the tests are actually done off-site, results will come back in about three days. The patient is advised to self-quarantine until a result comes back.

Any patients whom doctors feel need medical attention will also be given a location to go where they will limit exposure to other patients and staff.

The centers should all open within a few days, Wilkins said. CCHC’s drive through will be located at the former cancer center on campus at 1010 Medical Park Avenue, off Wellons Boulevard. It will open Thursday, he said, but will regularly run Mondays, Wednesdays and Fridays from 9 a.m. to noon.

Brandy Popp, director of communications at CarolinaEast, said no decision of where or when its testing site had been announced, and the Health Department did not return a call at press time.